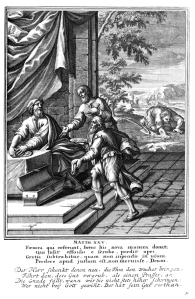 I was reading the story of the 10 talents the other day. It was a story Jesus told. A master of 3 servants gave them each some talents. He told them to use them while he went away. When he came back, the first two servants had used their talents to make more. The master praised them. The third man, however, had buried his talent in the ground. He held it out to the master, but the called him lazy, took the one talent and gave it to the man with 10. The master said the third servant would be thrown out.

Whenever I read about this story in a book or commentary, the authors say the talents represent our abilities and well, talents. In the story the talent is a sum of money. Quite a large sum.

I was meditating on this story and I think the talents represent faith. The man who buried his talent is lost in the end. We are saved through faith and not works, lest any man should boast, the Bible says; any good we do cannot save us.

I think the story points this out in the excuse the man had for why he decided to dig a hole in the ground and throw the money in there. He said, “Master, I knew you were a harsh man, harvesting crops you didn’t plant and gathering crops you didn’t cultivate.”

“I knew you were a harsh man.”  Is God harsh? Does he hover over us waiting for us to mess up so he can keep us out of heaven? No. He is not like that. He is hovering to see how many he can get into heaven. (Right here I could quote hundreds of Bible verses on God’s love, but I hope you will look them up yourself.)

The man said, “I know you reap where you did not sow.” What kind of farmer would expect his crop to grow if he sowed nothing in the field? Hmm, a crazy farmer, that’s for sure. This man seemed to be saying God asked the impossible from people. Is that true? No. God says we can do all things through Christ, who gives us strength. Jesus said, “Nothing will be impossible for you.” And, “My yoke is easy and my burden is light.”

The Bible says we will find God when we seek him with all our hearts. Jesus said eternal life means knowing him and his Father in heaven. Jesus also said he will say to many at the judgement, “I never knew you.”

There is a reason it is vital to know God; He is the way, the truth and the life. Our picture of God will determine how we act and how we treat others. If we see God as harsh, we may think it is fine for us to be harsh. But if we see God as someone who forgives us 70 x 7 times a day, then we will forgive also.

The best reason to know God is to understand the plan of salvation. We were lost, but through Jesus’ death, we are found. We can never be perfect and sinless; Jesus was perfect and sinless. As a man, he took our place; he stood in the breech between us and God. God’s law says the penalty for sin is death. He could not change his law, but he could die in our place and satisfy the justice his law demands. We are covered by Jesus’ life and death. He is called, “The Lord, our righteousness.”

8 thoughts on “Our Picture of God.”