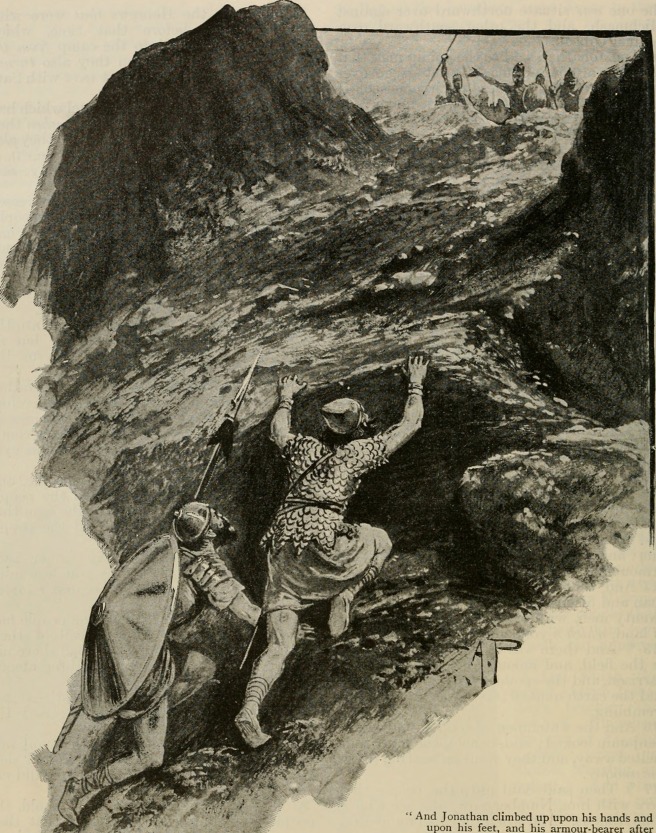 When the Israelites wanted a king, God chose Saul. A people called the Philistines were constantly oppressing Israel. One day Israel and the Philista gathered to wage war. But Israel had no weapons yet. Only the king and his son had swords. His son’s name was Jonathan.

I find Jonathan to be a wonderful example of faith, humility and courage.  This first story about Jonathan shows his faith in the power of God.

One day Jonathan son of Saul said to his young armor-bearer, “Come, let’s go over to the Philistine outpost on the other side.” But he did not tell his father.

Jonathan said to his young armor-bearer, “Come, let’s go over to the outpost of those uncircumcised men. Perhaps the Lord will act in our behalf. Nothing can hinder the Lord from saving, whether by many or by few.”

“Do all that you have in mind,” his armor-bearer said. “Go ahead; I am with you heart and soul.”

Jonathan said, “Come on, then; we will cross over toward them and let them see us.  If they say to us, ‘Wait there until we come to you,’ we will stay where we are and not go up to them.  But if they say, ‘Come up to us,’ we will climb up, because that will be our sign that the Lord has given them into our hands.”

So both of them showed themselves to the Philistine outpost. “Look!” said the Philistines. “The Hebrews are crawling out of the holes they were hiding in.”  The men of the outpost shouted to Jonathan and his armor-bearer, “Come up to us and we’ll teach you a lesson.”

So Jonathan said to his armor-bearer, “Climb up after me; the Lord has given them into the hand of Israel.”

Then panic struck the whole army—those in the camp and field, and those in the outposts and raiding parties—and the ground shook. It was a panic sent by God.

When all the Israelites who had hidden in the hill country of Ephraim heard that the Philistines were on the run, they joined the battle in hot pursuit. So on that day the Lord saved Israel, and the battle moved on beyond Beth Aven.”

Jonathan had probably remembered how God had fought for and saved Israel using Gideon and 300 men against the many thousands of Midianites.

Jonathan knew God could do anything and acted accordingly. His faith is a beautiful example to all of us.

7 thoughts on “Jonathan: A Man of Faith.”