I am posting chapters from my sister’s book, “The End is near. End Time Bible Prophecy Anyone Can Understand.” E.A. James. Available at lulu.com

(This is Belle writing right now. I just want to say that I believe the seven last plagues are situations we bring upon ourselves. God has held back the devastation that global warming can bring to us but there will come a day when he can protect us no longer. The “wrath” of God is a “turning away and letting those who have rejected him have their way.” Paul speaks of this in Romans where he says, “God gave them up..”   I think the plagues are the result of global warming and also the result of wickedness and hatred of nations against one another.)

Then I heard a loud voice from the temple, saying to the seven angles, “Go and pour out on the earth the seven bowls of the wrath of God.”  Rev. 16:1

So the first angel went and poured out his bowl on the earth; and it became a loathsome and malignant sore on the people who had the mark of the beast and who worshiped his image.  Rev. 16:2

The second angel poured out his bowl into the sea, and it became blood like that of a dead man; and every living thing in the sea died.  Rev. 16:3

Then the third angel poured out his bowl into the rivers and the springs of waters; and they became blood.  Rev. 16:4

The third trumpet heralded one third of fresh water becoming bitter, but here we see all of it becoming blood.  The death of all fish in fresh water would certainly cause it to turn to blood. 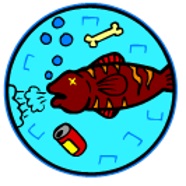 The fourth angel poured out his bowl on the sun, and it was given to it to scorch men with fire.  Men were scorched with fierce heat…  Rev. 16:8, 9

Here we see that the sun shines with such intensity that it scorches.

Then the fifth angel poured out his bowl on the throne of the beast, and his kingdom became darkened; and they gnawed their tongues because of pain, and they blasphemed the God of heaven because of their pains and their sores…  Rev. 16:10, 11

The fourth trumpet heralded the loss of one third of the light during both day and night, the sun’s and the night sky’s time to shine.  Here the fifth bowl completes the darkening of the sky.

Sixth Bowl of Wrath: The Euphrates River Dries Up.

The sixth angel poured out his bowl on the great river, the Euphrates; and its water was dried up, so that the way would be prepared for the kings from the east.  Rev. 16:12

Up to this point the bowl judgments have been literal and there is no reason to think that the sixth bowl is suddenly figurative and takes on prophetic language.  Therefore we have to look at the sixth bowl as referring to the real Euphrates River in Iraq.  There are many reasons the Euphrates could dry up.  The first trumpet heralds one third of the earth burned and the fourth bowl brings the scorching of the sun, so waters may easily dry up from what are seen as natural disasters.  The Euphrates could be dried up due to man-made interference such as the erection of a dam.  Or it could be caused by a direct act of God:  It is I who says to the depth of the sea, ‘Be dried up!’  And I will make your rivers dry.  Is. 44: 27